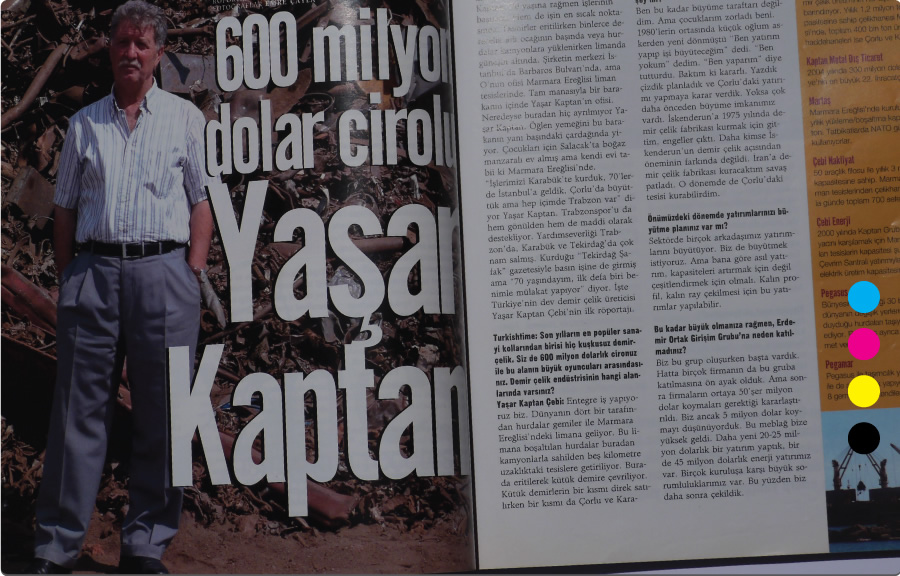 THE 42 LARGEST INDUSTRIALISTS AND 22ND LARGEST INDUSTRIALISTS OF TURKEY. IT IS AN EXPORTER. THE CAPTAIN OF THE CAPTAIN GROUP OF COMPANIES WITH A TURNOVER OF $ 600 MILLION IS 70 YEARS OLD, BUT TO DATE HE HAS NEVER SPOKEN TO THE MEDIA. YAŞAR KAPTAN ÇEBI TOLD HER SUCCESS STORY TO TURKISHTIME FOR THE FIRST TIME.
We are dealing with a modest businessman. although he owns a company with a turnover of 600 million dollars, he is an Anatolian person who has lost nothing from his humility, helpfulness and simplicity. Yaşar Kaptan Çebi, whom everyone around him calls Yaşar Kaptan. He never gave an interview until today because he didn’t like to be in the public eye or even think about it, Captain. despite the age of 70, he is still at work. At the hottest point of the job. Under the sun at the beginning of the thousands-degree arc January when the iron is being melted or in the harbor when the scrap is being loaded onto trucks. The company is headquartered on Barbaros Boulevard in Istanbul, but Its office is located at the Marmara Ereğlisi port facilities. He literally lives in a shed, my captain’s office. He almost never leaves here, Captain. He eats his lunch in the gazebo next to this shed. He bought a house with a view of the Bosphorus in Salacak for his children, but his own house is, of course, in the Marmara Ereğli. “We started our business in Karabük, we came to Istanbul in the 70s, we grew it in Çorlu, but I always have Trabzon in me,” says Yaşar Kaptan. He also supports Trabzonspor both wholeheartedly and financially. His benevolence Tuesday very famous in Trabzon, Karabük and Tekirdağ. He also entered the press business with the newspaper “Tekirdağ Şafak”, which he founded, but he says, “I am 70 years old, this is the first time someone is interviewing me”. Here is the first interview of Yaşar Kaptan Çebi, the giant iron and steel producer of Turkey.

Turkishtime: One of the most popular branches of industry in recent years is undoubtedly iron and steel. You are also among the major players in this field with your $Dec00 million turnover. In which areas of the iron and steel industry do you exist?

Yaşar Kaptan Çebi: We are doing integrated business. Scrap from all over the world comes to the port in Marmara Ereğli with ships. The scraps unloaded at this port are brought from here by trucks to facilities five kilometers from the coast. Here it is melted down and the billet is turned into iron. Some of the billet irons are sold directly, while some of them go to the plants in Çorlu and Karabük and turn into construction iron there. While the Çorlu plant mostly coincides with the domestic market, Karabük works more for export. But when you look at the collection, 90 percent of our production is export-oriented. We export wherever the price is affordable in the world.

Is the real reason why you are growing so much is because you are turning to exports, or is it something else?

I was not such a fan of growth. But my children forced me. in the mid-1980s, my young son had just returned from the military, and he said, “I’m going to invest and grow the business.” “I’m not,” I said. “I do,” he insisted. I saw that he’s stable. We wrote, drew, planned and decided to make the investment in Çorlu. Otherwise, we had the opportunity to grow much earlier. I went to Iskenderun in 1975 to build an iron and steel factory, obstacles arose. No one has yet been aware of the importance of Iskenderun in terms of iron and steel. I was going to build an iron and steel factory in Iran when the war broke out. At that time, I could have built the facility in Çorlu.

Do you have any plans to increase your investments in the coming period?

Many of our friends in the industry are growing their investments. We also want to enlarge it. But to me, the main investment is not to increase capacities, but to diversify them. These investments can be made for the withdrawal of thick profile, thick rail.

Even though you are so big, why didn’t you join the Erdemir Joint Venture Group?
We were there at the beginning when this group was forming. We have even helped many companies join this group. But then it was decided that the companies should put 50 million dollars in the middle. We were only thinking about putting in $5 million. This amount seems high to us. We just made a $20-25 million investment, and we have a $45 million energy investment. We have great responsibilities to many organizations. That’s why we pulled out later.

What has changed is that the iron and steel sector has been developing so rapidly in Turkey lately?

Many of our friends in the industry are growing their investments. We also want to enlarge it. But to me, the main investment is not to increase capacities, but to diversify them. These investments can be made for the withdrawal of thick profile, thick rail.

The fact that manufacturers in Turkey are turning to exports has brought companies into the international iron and steel market. In the past, only companies working in the domestic market and the domestic Sunday were also very limited. But with the opening up, there has been a very rapid progress. Foreign markets brought competition, and competition brought growth. Manufacturers began to import and bring large plants from Europe. For example, we have also received large production lines from Italy, we are currently installing them. A rolling stock line that produces a thousand tons in one shift. 3 thousand tons in three shifts per day is worth more than a million tons per year. These new facilities also reduce the cost. You’re pulling the iron 15 bucks cheaper. And you can sell this product outside, especially to the United States.

Does the port only work for you?

This place works for Trakya Cam outside of our business. They bring glass sand. There are also friends who are nail manufacturers who bring elephant-tongs. Flour loading is also being done. About 300-350 thousand tons of work is being done outside of us per year. We have obtained their permission, and we will start a large investment here soon. we will increase the 300-meter-long pier to 500 meters and open it to Ro-Ro ships. Ro-Ro lines will operate between Bandırma and Marmara Ereğl Dec.

How do you see the market?

Three years ago before that, at the time of our crisis, there was also a recession in Europe. There was also no large investment there. But recently the demand has increased at a serious rate. The factories there have renovated themselves and started working at full capacity. Of course, this was reflected in our sales.

Thanks to this, you also achieved a serious amount of turnover…

Turnover has increased, but it’s not going into our pockets. We were buying a ton of scrap for $ 180, we started buying it for $280-300. Of course, when the input of raw materials is high, the turnover is also large. Turkey already has a stockpile of 2-3 million tons of scrap. It also meets the remaining 17-18 million tons from the outside. As you can see, your production advantage decreases while turnover increases. When you look at Russia, which Turkey is buying up for scrap, you see huge facilities. These facilities were modernized with the help of foreigners. Now their capacity has increased. Coal and natural gas, which are necessary for production, are mined there. They have the scrap and the mine in their hands… That’s why they raise the price of the log when the scrap prices will fall.

Every big company has a story, how did you get into the iron and steel business?

My father was engaged in caravanning and trading in Trabzon. In the years after the establishment of the republic, he started the iron trade. I of the Russian army at that time. There are plenty of scraps left over from the extraction they made during World War II. My dad started collecting and selling these. since the import of scrap was prohibited until 1952, it was sold only at home, and with the issuance of a permit at that time, it also began selling abroad. Actually, I didn’t really want to deal with this stuff. I wanted to play football, but my father wouldn’t let me. I got my football enthusiasm when I joined the army in 1959. I played for the Gendarmerie Force Team. Some time after returning from the military, my father passed away. I had to get on top of my work.

How did your transition from the iron trade to industrialism happen?

We were in Trabzon and we were going to Karabük to buy goods. When we saw the large facilities in Karabük, we said, “Let’s build one too,” and we built a rolling mill with a capacity of 10 thousand tons in 1964. We increased the capacity of this facility to 10 times in 1974, that is, to 100 thousand tons. we came to Istanbul in 1975 and opened an office in Perşembepazarı. We were supposed to import billet iron at that time. That’s why we needed such an office. We have continued our business by renovating our facilities for many years. But we realized our real growth in 1987 in Corlu. We have established a plant with a capacity of 300 thousand tons per year. We have established the first natural gas-powered plant in Turkey.

You are from Trabzon, but you have not invested in your province and region…

It is not possible to find a field to make such an investment in Trabzon, Giresun and Rize. I used to be angry at those who earned the money in Trabzon and went elsewhere. But later, when I set up a facility in Karabük, I understood and deserved it. These cities are close to the energy we have access to. For example, I didn’t build this port here-I couldn’t have grown so big. At the ports, they received port charges of 7-8 dollars per ton. And they were working slowly. Arbitrary applications were also happening. Now I am doing the work I have done in 5 days at the state port in my own port in a day. And the cost of printing a ton is 1-2 dollars.

You’ve always been involved in the work around the iron and steel business. Have you ever thought about investing in other sectors?

We have only entered the ship business, except for iron and steel. We run a ship. Investment is very important in our business. If you fall behind in investing, you will lose quickly. That’s why we always invest in this business. Since our investments are also expensive jobs, we don’t have much left in our pockets. For example, now IÇDAŞ (Steel Energy Shipyard Transportation Industry Inc.Sh.) he is making a 250-ton January. And we are working with a 110-ton January. As you can see, there is a great attractive force in front of the sector. In this case, you can hardly think about investing in other sectors. 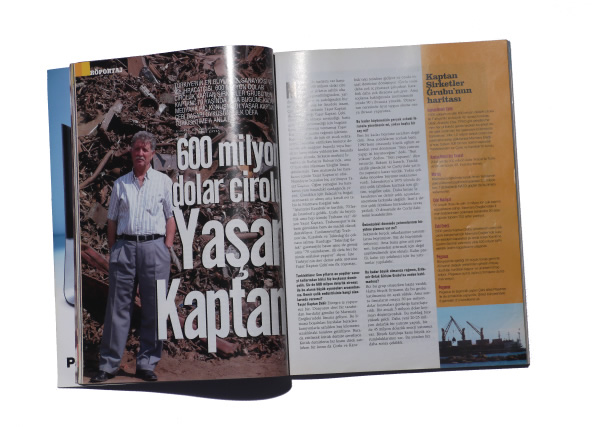